“Ninety percent of our Medjoul dates, which is our main focus, are exported,” says Avi Dagul of the Israeli exporting company, Agrifood Marketing. “Europe is the main Medjoul market at the moment. There is, however, a rising demand from other parts of the world, one example is Brazil which became a significant market.” 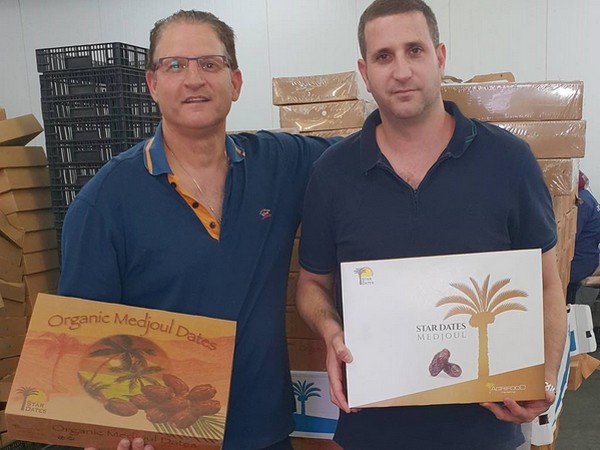 “The Medjoul also gains great interest and enthusiasm In China, Australia, India and Japan, we export to Japan already. It is going slowly at the moment, but I believe it will pay off in the end,” says Tal Dagul.

“In contrast, The Israeli Dates Exporters face a big problem,” says Avi. “The currency exchange rate is extremely low and makes it very difficult for us. The competition between the Israeli exporters does not allow us any price increases to compensate the exchange rate. And not only that, The Bank of Israel decided no longer to interfere when the shekel becomes too strong. “They used to buy dollars or euros and now they don’t anymore because they claim it is bad for the Israeli economy. The shekel will probably stay strong in the coming future and this is very bad, especially for the Israeli agricultural exporters.”

5 kg boxes of dates, packing them continues to be done by hand.

Demand not meeting production
The demand is growing, Avi says. “It is not equal to the rising of production”. This disparity creates pressure on the market especially for Christmas, production increases by about 10-15% every year. Some of this is natural as the trees bear more fruit. The rest is increased by plantation.

Plantations are done not only in Israel, we can see new plantations in the West Bank, Jordan, California, South Africa, and Morocco and as far as we understand, Morocco will be Israel’s toughest competitor in the far future.”

The US has a large local production, but it is mostly destined for the local market. The only other countries that produce Medjoul dates besides Israel, are the US, Morocco, South Africa, Egypt, Mexico, and small volumes in Peru. The current total world production is around 100,000 tons, of which, 45% grown in Israel. The US is the second-largest producer, at 25,000 tons. Morocco only produces 10% of the world’s Medjouls. 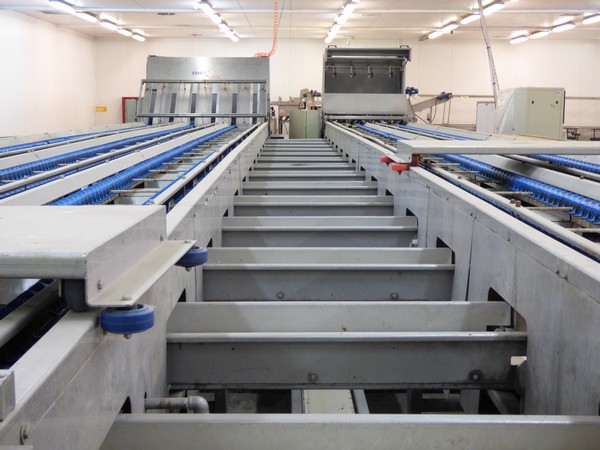 The demand for organic Medjoul is also on the rise and it is becoming a very special item, especially in Western and Northern Europe,” says Tal. “it increases every year, however, more and more farmers in Israel are switching from organic to conventional cultivation. It is very expensive to run an organic farm and farmers are not always getting the money they invest, either.”

In his opinion, the fact that organic farmers cannot use chemical pesticides is a disadvantage for them and affects the fruit size. they then get less money.

Humidity plays an important role in growing Medjoul
Morocco’s climate is not optimal to grow good Medjoul dates. Avi explains that the lower the humidity, the better it is for cultivating of the Medjoul dates. It benefits this product’s shelf life and appearance. It, however, does not help with the taste. In the Jordan Valley, where Agrifood grows their dates, there is about 35% to 45% humidity. Which makes them more soft and tasty. “The flesh of dates grown in the south of the country where the humidity is around 20% is a little tougher. But the dates cultivated in that area are better for commercial use as they have a longer shelf life. They also have a brighter reddish color, whereas those grown in the Jordan valley are a little darker with a brown color.”

“Morocco is a very humid country, like the north of Israel,” continues Dagul. “For example, the humidity near the Galilee lake in northern Israel is between 50% and 60%.

When the humidity is very high the skin separation percentage gets higher too and is between 30% and 50% and most of these dates are required to be sold locally. “We also export them, but at a lower price.”

Besides the requirement of low humidity, Dates need a dry climate and special salinity soil, but lots of water to grow optimally. “Israeli farms have very sophisticated irrigation systems that allows no waste of water and exact amount of water is provided to each tree.” 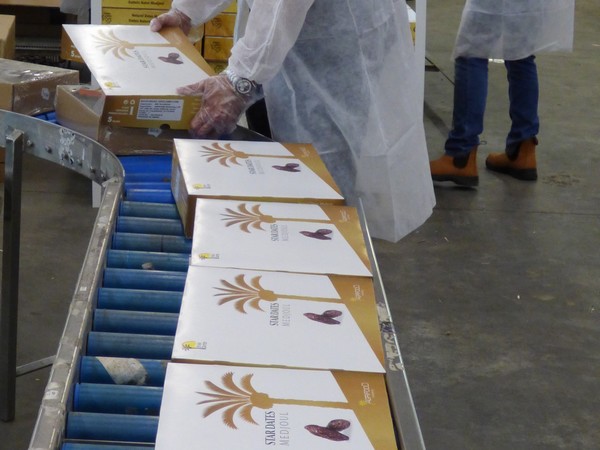 Future competition?
“A large percentage of the Moroccan dates may suffer from high skin separation, then it will be very difficult for them to compete against our high-quality dates. On the other hand, if they produce massive amounts as planned, I believe 10% will be of high quality and this produce will be sent, among others, to the European market. This will not, however, happen overnight, it will be at least seven to ten years before Morocco becomes a serious threat.” 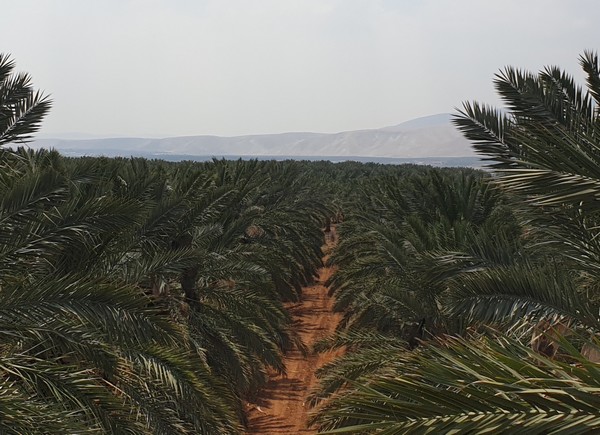 “When this happens Israeli exporters will have to join forces,” says Tal Dagul. “Israel is the biggest exporter of Medjoul dates in the world and we don’t face a current competition from the US.” He says Israeli companies do not really compete with each other on the European market as they all have their own longstanding clients. Some have had the same clients for almost 30 years.”

This year is different
This year’s crop is different from other seasons. High-quality and large sizes Medjoul characterize the harvest. Small or medium-sizes are hard to be found, says Avi. “If you have a preseason contract for these sizes, it is hard to fulfill it and You have to adjust your programs.

Is there any new date varieties produced in Israel? “The Bonbon dates is the newest variety available today and was revealed couple of years ago, they are simply Medjouls harvested two or three weeks early and they differ by their smooth skin, their Juiciness and their soft flesh.” 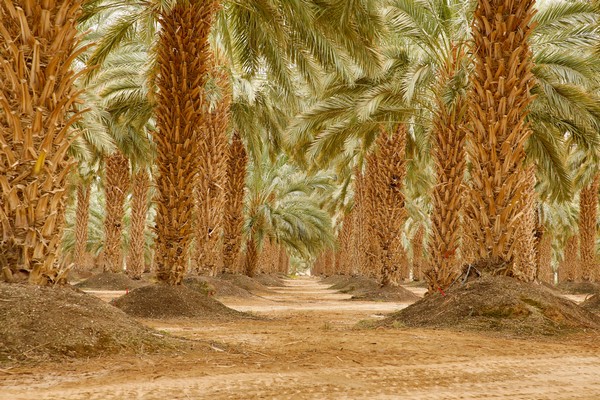 Italian and Turkish consumers prefer the lighter colored dates and Spaniards prefer the darker, juicier and tastier dates from the Jordan Valley, therefore, Some clients demand dates from a specific area.”

The price of Medjoul dates depends on their quality. “The price for superior quality Medjouls in Italy and Spain are different to the prices in Northern Europe, where they prefer medium quality dates,” says Tal Dagul. “We currently only sell dates cultivated in Israel. In the future, we could get supplies from other areas such as Jordan or the West Bank,” says Avi.” I think that when production increases in the West Bank, they will use Israeli companies for their marketing, in the coming future Agrifood could also branch out into other products, like avocados.”

Own Brand
Agrifood has its own brand – Star dates. “Star dates have been around for 15 years already and is well-known in the market. There used to be a second brand, but today, we promote only the Star dates. The only marketing we do at the moment is on Fresh Plaza and our own website,” explains Tal Dagul. “We do not advertise anywhere else. Agrifood also packs for private labels.” This totals about 40% of their volume. This amount has remained relatively stable throughout the years.

Dates have been becoming more and more popular among consumers as time goes on, and both distributors and retailers are starting to notice this trend.

While all dates are nutritious and delicious, Medjool dates stand out in the crowd. Native to Morocco, they are now grown In specific areas around

Agrifood Marketing is an Israeli dates company that supplies distributors and retailers with high-quality dates in many varieties and packaging options. In Europe, we are

Medjool dates are a hot commodity in Europe today, and you can buy Medjool dates bulk to take advantage of this trend. With Agrifood Marketing,